Due to the re-scheduling of the HFA County Challenge Cup semi-final between Pegasus Juniors and Hereford FC, which will now be played on Wednesday, 15th February, the fundraising sports quiz has been re-arranged.

The new date for the fundraising Quiz will be Wednesday, 8th March with an 8pm start, at the Richmond Club, Edgar Street, Hereford.

So why not get together and raise a team, as you will not only have a chance to win the £100 top prize, and the ‘Adam Stansfield Trophy’, but you will be helping to raise funds for HUST and its community projects, United in the Community and the Adam Stansfield Foundation.

We welcome Hereford fans teams, but we hope to see quiz teams representing other sides within the Herefordshire Football Association, and from across the Herefordshire sporting scene. Maybe your cricket team, rugby team, or local pub quiz side could put a team together? Teams can consist of up to 4 players, and it will cost only £2 per person to enter.

The winners of each round will win £25 in vouchers, and will go through to the ‘Final’ of the competition which will be held later in the year.

We are very grateful to Shaun Parkin from the Adam Stansfield Foundation for their support.

Speaking recently Shaun said, “We would be very pleased and honoured if you named the trophy after Adam. I will get in touch with both Exeter and Yeovil and see if they would be interested in entering a team.

“We are always looking for excuses to visit Hereford so again would be honoured to come up meet everybody and be involved in the prize giving.

“Thank you for thinking of us and we look forward to meeting you”.

Future venues for the event are expected to include Kington, Ledbury, Leominster and Ross-on-Wye.

A raffle draw and 50/50 draw will also be held at each venue.

Should any publican wish to add their venue to the schedule of quiz heats – completely free of charge – please get in touch with us.

Sponsorship opportunities are also available, and should you be able to donate raffle draw prizes we would be delighted to hear from you via our new lotto and fundraising email address: 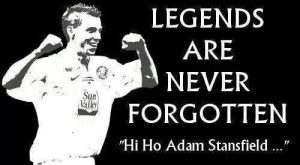 Bring on the Chester!

Bring on the Chester!

Our Financial Reality & Where You Can Help