Former Hereford favourite Ben Smith will be coming back to the county next month.

The ex-Bulls midfielder is holding an ‘Evening of Soccer’ at the Rankin Club, Corn Square, Leominster on Wednesday, 19th July, starting at 8pm.

The event is priced at £10 which includes a half-time buffet, and entry into the night’s raffle

And Smith is looking forward to the night.

“It’s 8 years since I left but playing for Hereford was the happiest period of my career so it will be good to come back,” said Smith.

“I’m sure it will be a really good night.”

Smith scored 25 goals in 151 games during two spells with the Edgar Street club and starred in the 2007–08 season as the Bulls gained promotion to Football League One. He was always a very popular figure at the club and after retirement has written a highly successful book ‘Journeyman’ which he describes as one man’s odyssey through the lower leagues of English football.

Having played for a succession of high-profile coaches and managers such as Bruce Rioch, Pat Rice, Alan Pardew, Colin Addison, David Webb, Graham Turner, Jimmy Quinn, Gary Peters, Garry Hill, and Steve Evans he has plenty of tales to tell, from memories of running out at Old Trafford, to cleaning England International David Seaman’s boots!

Doors open at 7pm, with the evening commencing at 8pm, with tickets available on a first-come, first served basis by emailing: editor@talkingbull.org

Once ordered supporters will receive an email confirming a specific ticket number, and payment details, but don’t leave it too late as demand for the event is expected to be high.

A member of the present Hereford FC squad will also be at the event for a Q&A session as the club look ahead to the Evo-Stik Southern League Premier Division campaign.

Watch out for details of further summer events in August which will be released shortly. 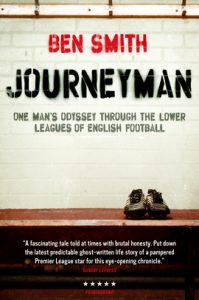