Football connects us all

June is Pride Month so we thought it would be the perfect time to catch up with FSA associates Pride In Football’s co-chair Rishi Madlani. Pride In Football is a network of supporter groups who actively work together to eliminate LGBT+phobia from football and ensure football is for all….

The FSA: Hi Rishi, we all have our own routes into becoming matchgoers, what was yours? You’re a Leicester lad… 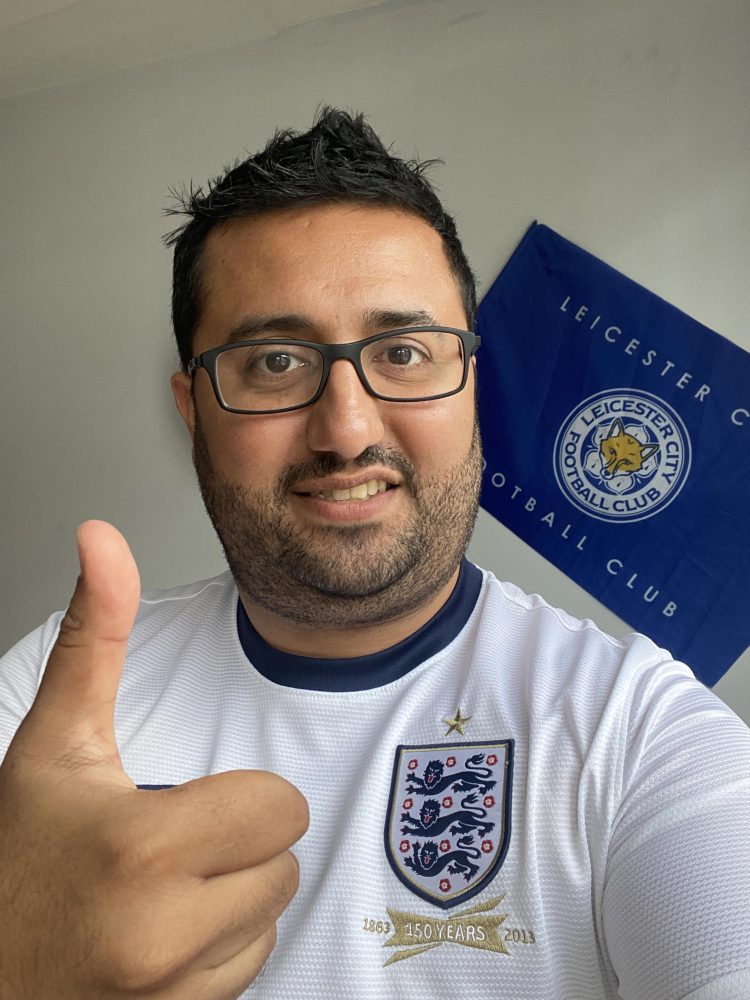 Rishi: I was lucky enough to start going in the 90s and caught the peak of the Martin O’Neill era. Although my Leicester cousins took me to my first home game, I usually went to games by myself – mostly London away games as I was studying there at the time.

There weren’t many people who looked like me and it was before I knew I was gay. Leicester’s an ethnic majority city but the stands didn’t reflect that although that’s changed significantly now. So it took me a while to get my groove but after a while you get to know people and feel part of a community.

Over the season you get to know and recognise certain characters although I never really saw anyone who was openly LGBT at the time. Fast forward 25 years and I’m taking my boyfriend to the odd away game – mostly against his will! – so it does feel a much more comfortable place to be now.

If a husband and wife held hands at an away game no-one would bat an eyelid – but could anyone be sure that would be the case for an LGBT+ couple? That must be Exhibit A for showcasing the need for campaigns which challenge LGBT+phobia.

I’m 6’2” and a big Asian lad, so I’m not really scared of anything, but not everyone’s the same and we have to make it easier and comfortable for everyone. Statistically speaking five to ten percent of the population are gay, we’ve always been here since football began, but we’ve not been able to be visible and be ourselves which needs to change.

In a perfect world Pride In Football would be extinct and not needed. Being LGBT+ should be unremarkable. But we’re definitely not there yet and until we are we’ll sure as hell fight for that. Any pushback shows there are still hearts and minds to win but I can’t believe how far we’ve come in 20 years. Part of that is down to legislation – equality of the age of consent, civil partnerships and so on – as that trickles through into people’s attitudes. There’s also role models like Jake Daniels at Blackpool, he’s been fantastic, and I’ve been really impressed with how his club handled it too.

And the response to Jake’s statement was overwhelmingly positive…

People aren’t necessarily hateful, with some people it’s just about understanding. Obviously there’s a small group of people you’re never going to reach, but I can stand in the crowd at Leicester with people around me who know I’m gay and they’re real allies of Foxes Pride. Football connects us all as strangers, it’s wonderful, it has that power.

As a Leicester City fan then, what was your route into Pride In Football?

I met Chris Paouros at a Stonewall event six or seven years ago and she’d just set up Proud Lilywhites [editor’s note – Chris is on the FSA Board nowadays]. I thought we should do that, and we’re rivals on the pitch, but off it we’ve always helped each other out as that’s what it’s about. There are new groups forming all the time and we can all share experiences and knowledge. Even this week there’s a new group setting up at Leyton Orient.

We’d like to get a group set up at every club, at the minute there are around 40, and we’re seeing new ones all the time, like Rainbow Saints at Southampton. Foxes Pride works with LGBT+ groups like those at Nottingham Forest and Mansfield Town from a Midlands perspective too – we can all work together to help change that culture.

Before lockdown we arranged loads of fan meet ups and we’re able to do that again – 25 Manchester City supporters from Canal Street Blues came along to the Rainbow and Dove club after the game last time, although it sometimes works better to have those events pre-match so the result doesn’t spoil it!

As well as club-specific stuff does Pride In Football partner with other national level organisations too?

Yeah, over in Wales, Jason from the Welsh FA has been helping with that work and there’s Three Lions Pride at international level. We also promote partnerships with yourselves, and encourage members to join the FSA, and worked with you on our submission to the Fan-led Review too. We’ve also recently teamed up with Her Game Too.

We support Rainbow Laces, Football v Homophobia and Football v Transphobia too. Pride is in June plus there are always lots of local Pride events to promote. Our role is often to help elevate campaigns and we do that with broader football stuff as well as FSA campaigns. We’re planning something with Fans for Diversity and we’d like to do a real world conference sometime in the next 12 months.

And what’s been going on locally with your member groups lately?

Pride of Irons has been doing a lot on restorative justice with fans, which is really good work. That’s where someone at the match has said something homophobic and they’re brought into the club to speak to people who it affects and help them understand why it’s wrong. Ultimately we’re all connected via the love of our club but some fans, particularly younger ones, might not have been aware of the harm homophobic language can create. They might not have had that experience in life so it’s about engaging them to become supporters rather than detractors.

We hear Foxes Pride have had a good year too?

Yes, we were proud to win Supporters Group of the Year at February’s Football v Homophobia Awards while Leicester City picked up the club prize – a nice double! There are groups around the country doing amazing work but, as a “small big club” we get lots of help from the club and player involvement which helps.

A great example was Jamie Vardy when he hit the corner flag, which was a pride one, and people misunderstood the gesture. So Jamie decided to do something about that and sent us the signed flag, which was great and gave the message that LGBT+phobic comments are not welcome in football.

Lastly, if there’s a young fan out there who thinks this is great, I’d love to set up my own LGBT+ group, what should they do?

We have a toolbox to help new groups form, so look at that but reach out and we’ll help, there’ve been four or five examples in the past few months alone. It’s also worth checking if a group already exists at your club as we have 40-plus member groups already.

The clubs will want to work with you and when we’ve set up things at Leicester you get young and older people coming along – grabbing badges and things for themselves or their younger relatives to show they’re allies too. It was very moving and it’s a great thing to get involved in. Young people are generally fantastic at this, children aren’t born prejudiced, and if we can tap into that we can really change things for the better.

Nice one Rishi – thanks for all your time!

Up Next at Edgar Street are Chorley

Up Next at Edgar Street are Chorley